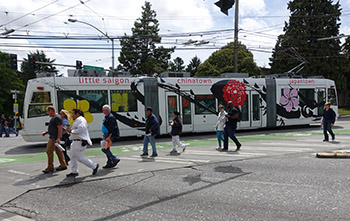 As the initial phase of Yesler redevelopment got underway, the Seattle Department of Transportation (SDOT) began to lay tracks and build new infrastructure for a streetcar through the neighborhood to connect residents with the rest of the city and a regional transportation network. The line, known as the First Hill Streetcar, has been in operation since early 2016. There is a station located directly in front of the Yesler Community Center, where visitors to Yesler can disembark and residents can hop on and ride to other neighborhoods and services, employment centers, Link light rail stations and other transit hubs.