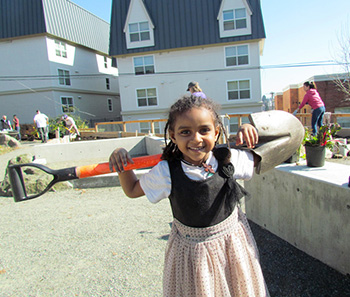 When redevelopment is complete, Yesler will feature about an acre of community gardening, nearly 300 plots, located throughout the neighborhood. Community garden spaces feature storage sheds, water, hoses and plots for residents to grow food for their own use or for sharing. The gardens promote healthy eating as well as exercise and healthy interaction among neighbors.

Horiuchi Park, located on the east side of Boren Avenue north of Yesler Way, is named after Northwest artist Paul Horiuchi. As part of the Yesler redevelopment project, the formerly isolated and little used area was transformed into a 29-plot community garden. The design for the garden, the first to open as part of the redevelopment of Yesler, pays tribute to Horiuchi’s unique artistic style of using patterned collage. Horiuchi (1906 – 1999) was born in Oishi, Japan and travelled to the United States in 1917. A longtime Seattle resident, Horiuchi was a versatile and talented runner and baseball player, polyglot fluent in Japanese, English and Spanish, father, husband and artist.

The community gardening program at Yesler is managed by the Seattle Department of Neighborhoods P-Patch Community Gardening Program. Residents interested in signing up for a plot may contact the P-Patch program directly.