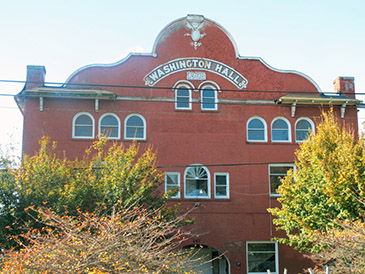 Washington Hall, built in 1908, is located in the eastern part of the Yesler Terrace Redevelopment Area. The historic building has hosted musicians such as Marian Anderson, Mahalia Jackson, Billie Holiday, Duke Ellington, Count Basie, and Jimi Hendrix, and speakers such as W.E.B. du Bois, Marcus Garvey and Joe Louis. In its storied past, the building has been home to a public dance hall and at least one church congregation. It has served as an avant-garde performance arts space and a popular gathering place for the local community.

Over the last few decades, the building fell into disrepair and was in danger of demolition until it was purchased by Historic Seattle, a public development authority and charitable foundation dedicated to historic preservation.

When Historic Seattle mounted a capital campaign to bring Washington Hall back as a regional cultural institution, the Seattle Housing Authority contributed funds to help ensure that this important performing arts center and community meeting space remains one of the Yesler neighborhood’s anchor institutions.