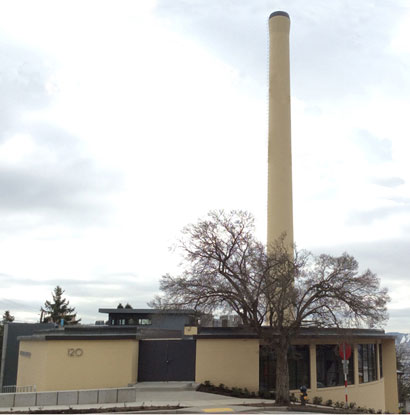 In April 2014, the former historic Yesler Steam Plant was reborn as the Epstein Opportunity Center, named for Jesse Epstein who served as the Seattle Housing Authority’s first executive director. The structure now houses programs and activities to serve residents of the Yesler neighborhood, including Yesler Head Start operated by Neighborhood House, Seattle Housing Authority’s Economic Opportunity Program and Youth Tutoring  sponsored by Catholic Community Services. Two community rooms in the building are available as meeting space for neighborhood organizations, and often serve as the location for adult skills training classes.

The building is located at the corner of Eighth Avenue and Spruce Street. The original industrial plant was built in 1941 and provided coal-fired hot water heat to the neighborhood and other areas of the city until it was decommissioned in 1989. It then served as a landscaping and facilities shop for Harborview Medical Center.

In 2010, the building was designated as a Historic Landmark by the City of Seattle and, in 2011, the Seattle Housing Authority received funding to renovate the site. The Seattle Housing Authority carefully preserved the historic exterior and 142-foot stack. The adaptation as a community center added seismic upgrades, stairs, an elevator and restrooms. A second floor was added to the interior, more than doubling the floor space from 7,500 to 16,000 square feet. Where coal trucks used to be accommodated on the roof, a play area was added for the Head Start program.