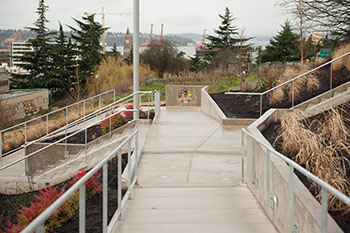 The Yesler Hillclimb is an outdoor pedestrian thoroughfare that connects the neighborhoods of First Hill, Yesler, Chinatown-International District and Little Saigon. It was created by the Seattle Housing Authority (SHA) as part of the redevelopment of Yesler Terrace. The 10th Ave S Hillclimb is open for all residents, neighbors and the public to enjoy.

This pathway along 10th Ave S from S Main Street to S Jackson Street provides a means for people who live and work in the area to travel on-foot to a wide array of businesses, transit options, cultural amenities, recreational sites and social services that exist within the adjacent neighborhoods. It is also a destination in itself, featuring beautiful mosaic medallions along the route and south-facing views of Mt. Rainier and Elliott Bay.

The Hillclimb displays beautiful mosaic medallions along the route, created by artist Mauricio Robalino, who engaged Yesler neighbors in design concepts that represent the past, present and future of Yesler. In every medallion a raven is present in the scene. The 25 medallions depict the raven’s observations as it flies through the neighborhood, observing the people, landscape, animals, and the transformation of the neighborhood. Robalino incorporated more than 100 glass mosaic pieces created by community member art workshops.

Cyclists can use the Hillclimb’s “bike runnel” to conquer the steep slope, connecting to and from designated bike paths on Yesler Way, Broadway and South Jackson Street.